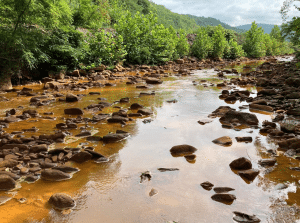 Pictured is the lower portion of Deckers Creek looking upstream to the former Richard Mine, which has left behind a legacy of degraded water quality throughout the creek. But a new planned acid mine drainage treatment system promises to clean up this stretch of the creek in Monongalia County.

Brian Hurley remembers that it used to be hard to decide whether the upper portion of Deckers Creek was in worse shape than its lower portion, which runs through Morgantown.

“They were both very, very poor,” said the executive director of Friends of Deckers Creek, the Morgantown-based group that has worked since 1995 to clean up the creek watershed. “I can’t even think of a good analogy. Would you rather be seasick on a cruise or get food poisoning on a tropical vacation?”

But after extensive work to clean up the upper segment with acid mine drainage treatment systems, Hurley said he hopes a new treatment project focused on the lower 5 miles of the creek will make it hard to decide which stretch of the creek is cleanest.

That’s one of many new possibilities opened up by a new partnership between Northeast Natural Energy, the West Virginia Department of Environmental Protection and the U.S. Department of Agriculture’s Natural Resources Conservation Service to operate and maintain a treatment system designed to treat acid mine drainage in the lower portion of Deckers Creek.

The system will treat acid mine drainage originating from an underground coal mine, the Richard Mine, which closed in 1952 but has persisted in degrading the creek’s lower stretch since then.

Natural Energy is a Charleston-headquartered oil and gas exploration company whose operational office is in Morgantown, near the mouth of Deckers Creek. The company will be covering treatment system operating and maintenance costs totaling about $200,000 a year, with abandoned mine land reclamation funding going toward other project costs.

“The real celebration won’t occur until the water’s cleaned up,” Northeast Natural Energy founder and CEO Mike John said. “That’ll take a little bit of time, once this filtration system is set up and running, before the water runs clean enough to sustain life, but we’re excited about it. We certainly look forward to that day.”

So does Hurley, who is eager for the treatment system to eventually restore life to waters where iron and other residuals from acid mine drainage have suffocated the entire stream ecosystem, turning the water orange and lessening the area’s recreational pull, even with a rail trail following the creek.

“Most tangibly, [there are] health impacts that you get from lack of recreational opportunities because, if I want to go out on a bike trail … I’d be far less inclined to ride my bike next to a stream that is orange and smells of sulfur than I am to go for a bike ride next to a stream that is beautiful,” Hurley said. “The upper stretch of Deckers Creek does have waterfalls and beautiful rhododendrons, but that’s just far enough outside of town that you really have to be dedicated to drive the rail trail the whole way up.”

But the forthcoming treatment system is expected to make Deckers Creek more satisfying and accessible.

“We’re pretty excited to have this system going in,” Hurley said.

Read More »
May 18, 2021
PrevPreviousNNE will fund operations and maintenance of Richard Mine treatment plant on Deckers Creek
NextNortheast Natural Energy Announces it has achieved certification through the Equitable Origin EO100™ StandardNext
Go to Top