Appalachian natural gas producer Northeast Natural Energy is a small, locally-focused company that is privately owned and with about 55 full-time employees, drilling mainly in two West Virginia counties along the Pennsylvania border. It doesn’t have the operational heft and big capital expenditure of the big dogs in the basin. But it’s also put together a long track record of transparency, opening up its wells to independent academic scrutiny. And this week NNE took another step as a pioneer in transparency, reaching a deal with two multinational nonprofits, Equitable Origin and MiQ, to certify that its natural gas production meets environmental and social standards on a global scale. It’s the same commitment that the region’s largest driller, EQT Corp., made earlier this month. But NNE and EQT are the only two so far to do so in what may become a wave of natural gas producers, particularly in emissions-conscious Appalachia, to join the effort.

In an interview with the Pittsburgh Business Times, NNE Founder/CEO Michael John said it’s a nobrainer for the company. And it’s an evolution of what NNE has put into place since the company was founded over a decade ago and drilled its first well in 2013. “When we saw an opportunity to be a part of the responsibly sourced gas measurement program, we were all in,” John said. “We want to be measured. We are very proud of the fact that we are a natural gas company who understands the use of natural gas is good for not just our region but for our country and the world.” MiQ’s standards, which are in constant development, hone in on methane intensity, the amount of methane that is being emitted into the atmosphere where it is a significant source of global climate change. Natural gas producers have made strides in reducing greenhouse gas emissions, especially in Appalachia, where the companies often integrate it deeply into their operations and performance metrics. And producers have a big economic incentive to do so. Methane is natural gas itself, so every bit that leaks is gas that drillers have produced but then can’t sell.

And the promise of certification, of the designation of responsibly sourced natural gas, could lift some gas products beyond commodity status, providing a potential premium among utility companies and others who want to meet ESG goals and standards. It also puts Marcellus and Utica shale gas, at least EQT and NNE’s, on an emerging international market. “We’re really excited about being a local participant in a global market,” said John. “It’s critical for those of us who have been in this a long time and want to do this for a long time, we must embrace concepts like responsible natural gas.” It’s easy for a company to say it’s ESG-focused. But NNE from the very beginning has shown that by opening up for deep analysis production wells in northern West Virginia near Morgantown. NNE works with West Virginia University, Ohio State University and the U.S. Department of Energy on the Marcellus Shale Energy and Environmental Laboratory studies, which look at the long-term impacts of shale development.

NNE has been ahead of the curve in other ways, including doing leak detection and repair and using no-bleed/low-bleed controllers, all before it was required. It’s working to bring another innovation, an all-electric hydraulic fracturing fleet, to its operations. It also works with outside organizations to help improve its footprint. “We’re looking at everything we possibly can that will help us operate more efficiently and in an environmentally friendly manner,” said Brett Loflin, VP of regulatory affairs. John said it’s a natural fit for NNE to work with Equitable Origins and MiQ.

Georges Tijbosch, senior adviser at MiQ, said he’s happy that NNE and EQT have signed on to be early adopters of the environmental standards. He said that it will not only reduce the methane emissions but it will also help companies compete on the global market under a single standard that has been so far elusive. “I’m very confident that we’ll get more and more companies to sign up,” Tijbosch said. John said NNE’s plan is to get all of its West Virginia production certified. It will likely take several months for everything to be up and running but the gas should be certified by the end of the fourth quarter. It is working with Baker Hughes and its new technology to help measure the emissions. “We’re doing it because it’s the right thing to do and fits very naturally with the culture of our company with the methane processes in place from an operational standpoint,” John said. “We’re a dry gas natural gas producer and we understand that if everything we do is measured, we’re going to score very highly.” 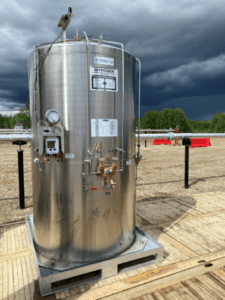 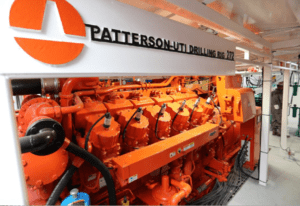 Drilling For Gas – With Gas